Humans have a long-standing relationship with the sea that spans nearly 200,000 years. Researchers have long hypothesized that places like coastlines helped people mediate global shifts between glacial and interglacial conditions and the impact that these changes had on local environments and resources needed for their survival. Coastlines were so important to early humans that they may have even provided key routes for the dispersal of people out of Africa and across the world.

Two new multidisciplinary studies published in the journals Quaternary Science Reviews and Quaternary Research document persistent human occupation along the South African eastern seaboard from 35,000 years ago to 10,000 years ago. In this remote, and largely unstudied, location — known as the “Wild Coast” — researchers have used a suite of cutting-edge techniques to reconstruct what life was like during this inclement time and how people survived it.

The research is being conducted by an international and interdisciplinary collaboration of scientists studying coastal adaptations, diets and mobility of hunter-gatherers across glacial and interglacial phases of the Quaternary in coastal South Africa. The research team is led by Erich Fisher, Institute of Human Origins at Arizona State University; Hayley Cawthra with the South Africa Council for Geoscience and Nelson Mandela University; Irene Esteban, University of the Witwatersrand; and Justin Pargeter, New York University.

Together, these scientists have been leading excavations at the Mpondoland coastal rock shelter site known as Waterfall Bluff for the last five years. These excavations have uncovered evidence of human occupations from the end of the last ice age, approximately 35,000 years ago, through the complex transition to the modern time, known as the Holocene. Importantly, these researchers also found human occupations from the Last Glacial Maximum, which lasted from 26,000 to 19,000 years ago.

The Last Glacial Maximum was the period of maximum global ice volume, and it affected people and places around the world. It led to the formation of the Sahara Desert and caused major reductions in Amazonian rainforest. In Siberia, the expansion of polar ice caps led to drops in global sea levels, creating a land bridge that allowed people to cross into North America.

In southern Africa, archaeological records from this globally cold and dry time are rare because there were widespread movements of people as they abandoned increasingly inhospitable regions. Yet records of coastal occupation and foraging in southern Africa are even rarer. The drops in sea level during the Last Glacial Maximum and earlier glacial periods exposed an area on the continental shelf across southern Africa nearly as large as the island of Ireland. Hunter-gatherers wanting to remain near coastlines during these times had to trek out onto the exposed continental shelf. Yet these records are gone now, either destroyed by rising sea levels during warmer interglacial periods or submerged under the sea.

The research team — the Mpondoland Paleoclimate, Paleoenvironment, Paleoecology, and Paleoanthropology Project (P5 Project) — has hypothesized that places with narrow continental shelfs may preserve these missing records of glacial coastal occupation and foraging.

“The narrow shelf in Mpondoland was carved when the supercontinent Gondwana broke up and the Indian Ocean opened. When this happened, places with narrow continental shelfs restricted how far and how much the coastline would have changed over time,” Cawthra said. 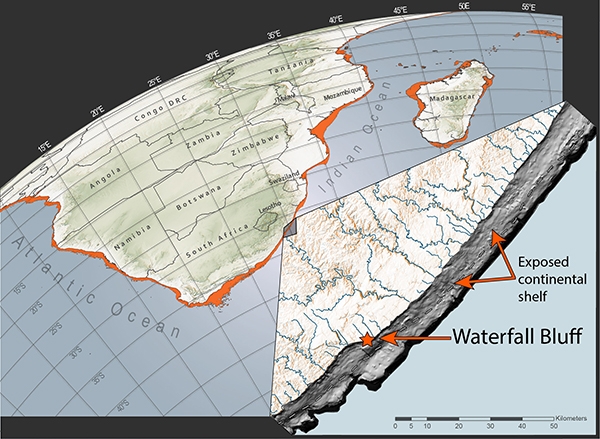 In Mpondoland, a short section of the continental shelf is only 10 kilometers wide.

“That distance is less than how far we know past people often traveled in a day to get sea foods, meaning that no matter how much the sea levels dropped anytime in the past, the coastline was always accessible from the archaeological sites we have found on the modern Mpondoland coastline. It means that past people always had access to the sea, and we can see what they were doing because the evidence is still preserved today,” Fisher said.

The oldest record of coastal foraging, which has also been found in southern Africa, shows that people relied on coastlines for food, water and more favorable living conditions over tens of thousands of years.

In the study published in the journal Quaternary Research, led by Fisher, a multidisciplinary team of researchers documents the first direct evidence of coastal foraging in Africa during a glacial maximum and across a glacial/interglacial transition.

According to Fisher, “the work we are doing in Mpondoland is the latest in a long line of international and multidisciplinary research in South Africa revealing fantastic insights into human adaptations that often occurred at or near coastlines. Yet until now, no one had any idea what people were doing at the coast during glacial periods in southern Africa. Our records finally start to fill in these long-standing gaps and reveal a rich, but not exclusive, focus on the sea. Interestingly, we think it may have been the centralized location between land and sea and their plant and animal resources that attracted people and supported them amid repeated climatic and environmental variability.”

To date this evidence, P5 researchers collaborated with South Africa’s iThemba LABS and researchers at the Centre for Archaeological Science of the University of Wollongong to develop one of the highest-resolution chronologies at a southern Africa Late Pleistocene site, showing persistent human occupation and coastal resource use at Waterfall Bluff from 35,000 years ago to 10,000 years ago. This evidence, in the form of marine fish and shellfish remains, shows that prehistoric people repeatedly sought out dense and predictable seafoods.

This finding complements the results of a companion study published in the journal Quaternary Science Reviews, where paleobotanists and paleoclimatologists, led by Irene Esteban, used different lines of evidence to investigate interactions between prehistoric people’s plant-gathering strategies and climate and environmental changes over the last glacial/interglacial phase. This is the first multiproxy study in South Africa that combines preserved plant pollen, plant phytoliths, macro botanical remains (charcoal and plant fragments) and plant wax carbon and hydrogen isotopes from the same archaeological archive.

According to Esteban, “it is not common to find such good preservation of different botanical remains, both of organic and inorganic origin, in the archaeological record.”

Each one of these records preserves a slightly different window to the past. It let the researchers compare different records to study how each one formed and what they represented, both individually and together.

“Ultimately,” Esteban said, “it allowed us to study interactions between hunter-gatherer plant-gathering strategies and environmental changes across a glacial-interglacial transition.”

Today, Mpondoland is characterized by afrotemperate and coastal forests as well as open woodlands that are interspersed with grasslands and wetlands. Each of these vegetation types supports different plant and animal resources. One of the key findings of this study is that these vegetation types persisted across glacial and interglacial periods, albeit in varying amounts due to changes in sea levels, rainfall and temperature. The implication is that people living in Mpondoland in the past had access to an ever-present and diverse suite of resources that let them survive there when they couldn’t in many other places across Africa.

Importantly, this study showed that people who lived at Waterfall Bluff collected wood from coastal vegetation communities during both glacial and interglacial phases. It is another link to the coastline for the people living at Waterfall Bluff during the Last Glacial Maximum. In fact, the exceptional quality of the archaeological and paleoenvironmental records demonstrates that those hunter-gatherers targeted different, but specific, coastal ecological niches, all while collecting terrestrial plant and animal resources from throughout the broader landscape and maintaining links to highland locales inland.

“The rich and diverse resource bases targeted by Mpondoland’s prehistoric hunter-gatherers speaks to our species’ unique generalist-specialist adaptations,” Pargeter said. “These adaptions were key to our species ability to survive wide climate and environmental fluctuations while maintaining long-distance cultural and genetic connections.”

Together, these papers enrich our understanding about the adaptive strategies of people facing widespread climatic and environmental changes. They also provide a complementary perspective on hunter-gatherer behavioral responses to environmental shifts that is often biased by ethnographic research on African hunter-gatherers living in more marginal environments. In the case of Mpondoland, it is now evident that at least some people sought out the coast — probably because it provided centralized access to fresh water as well as both terrestrial and marine plant and animal resources, which supported their daily survival.

According to Esteban and Fisher, “these studies are just a drop in the ocean compared to the richness of the archaeological record we already know is preserved in Mpondoland. We have high expectations about what else we will discover there with our colleagues in South Africa and abroad when we can get back to the field safely in this post-COVID world.”

Written by the P5 Project team and Julie Russ