Astronomy and paleoanthropology are two branches of science that generally don’t intersect. But this fall, the Institute of Human Origins at Arizona State University is launching a contest for U.S. middle and high school students challenging them to do just that — think about the connection between our drive for discovery and exploration of our human origins on Earth and in our own solar system.

The unique connection was initiated by the Southwest Research Institute team led by principal investigator Hal Levison and deputy principal investigator Cathy Olkin, who are heading NASA’s Lucy mission to explore the Trojan asteroids — two groups of asteroids that lead and follow Jupiter in its orbit around the sun. The mission will explore seven of these asteroids that hold vital clues to deciphering the history of the solar system.

Since these rocky remnants promise to help us understand the origins of our solar system, the team named the mission for “Lucy,” the 3.2 million-year-old fossil skeleton discovered by IHO Founding Director Donald Johanson in Ethiopia in 1974. Lucy’s species, Australopithecus afarensis, is believed to be our earliest human ancestors.

“Just as the Lucy fossil provided unique insights into humanity’s evolution, the Lucy Mission promises to revolutionize our knowledge of planetary origins and the formation of the solar system,” said Levison.

The Lucy mission spacecraft is scheduled with a launch window open from Oct. 16 to Nov. 5, and it will be carrying an ASU-built instrument — a thermal emission spectrometer, which is being developed by a team led by ASU’s Philip Christensen.

The contest will be led by the Institute of Human Origins through AskAnAnthropologist.asu.edu and AskAnEarthSpaceScientist.asu.edu, with the support of NASA, the Southwest Research Institute, ASU School of Earth and Space Exploration and L’SPACE – NASA’s Lucy Student Pipeline Accelerator and Competency Enabler program. L’SPACE is a free, online, interactive workforce development program open to STEM undergraduate students interested in pursuing a career with NASA or with other organizations involved in exploration. 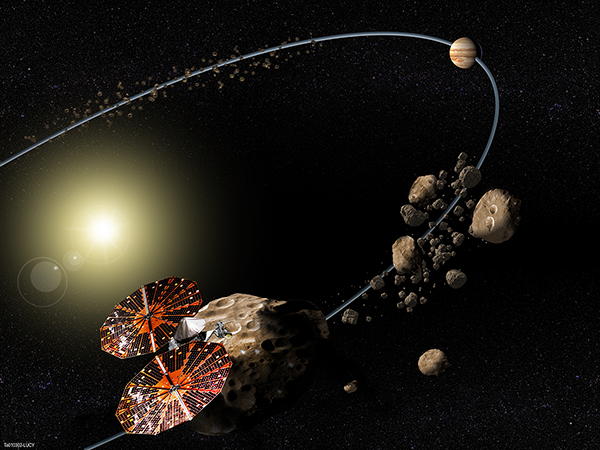 Marking one year until the launch of the Lucy spacecraft, the contest kicks off Oct. 16. Middle and high school students in the U.S. will submit creative artwork or videos and essays to explore the connection of ideas and methods of science across a broad spectrum of ways to study science — biology, earth science, and space and planetary science. Students will focus on the connection between what Lucy’s species taught us about our human origins and what we hope to learn from the asteroids about the solar system’s origins.

Middle school students will design a “mission patch” showing how the process of evolution on Earth may parallel the evolution of the solar system and explain the design with a poem or short essay.

High school students will create a message to any future finders of the Lucy spacecraft, which will likely orbit the sun for more than 1 million years and could be recovered by our descendants in some distant future. The message, in the form of original artwork or short video and an essay or poem, should highlight humankind’s drive to explore, discover and understand our origins — on Earth and in the solar system. Entries should emphasize the connection between the discovery of the Lucy fossil and NASA’s Lucy space mission.

The contest will run through March 16, 2021, with winners announced in May 2021. First-place winners will receive virtual visits to their school by Johanson and Levison and an invitation to attend — along with their teacher — the launch of the mission at Cape Canaveral in Florida in October 2021. (The winners/teachers will be responsible for costs to attend.)

In addition to the seven Trojan asteroid targets, the Lucy spacecraft will also visit one asteroid in the Main Asteroid Belt named “52246 Donaldjohanson.”

“It is such an honor to be a small part of this incredible space mission,” Johanson said. “And importantly, to use this opportunity to spur on the imaginations and love of science in the next generation of earth and space scientists through this contest.”

Full contest rules and entry details can be found at LucyinSpace.asu.edu.