Liam Gleason sat scrolling through dozens of images hoping to find something that showed diversity in anthropology for a poster they were creating. An image search for “archaeologist” yielded many results, but they were all very similar and didn’t capture the diversity of the profession.

“There was one archaeology image that showed a man and a woman working in a ditch,” Gleason said. “He’s got this giant white mustache and a helmet, and he’s digging for bones, and she has an hourglass figure and is serving the man drinks.”

In that moment, the idea for Anthro Illustrated was born.

Gleason, a graduate student in the School of Human Evolution and Social Change who prefers they/them pronouns, was frustrated by the lack of diversity shown in depictions of anthropologists, so they decided to create their own. Gleason formed a team of interdisciplinary Arizona State University anthropology graduate students to help and commissioned an artist to create vibrant digital illustrations that feature a wide range of anthropologists.

The project is called Anthro Illustrated, and the illustrations are available free of charge for personal and noncommercial use, with the hope they will be used for public outreach. The illustrations are appropriate for adults and kids and are accessible through the website www.anthroillustrated.com.

For example, this archaeological illustration (below) depicts a pottery excavation, and a variation of the same image shows an excavation of human skeletal remains. 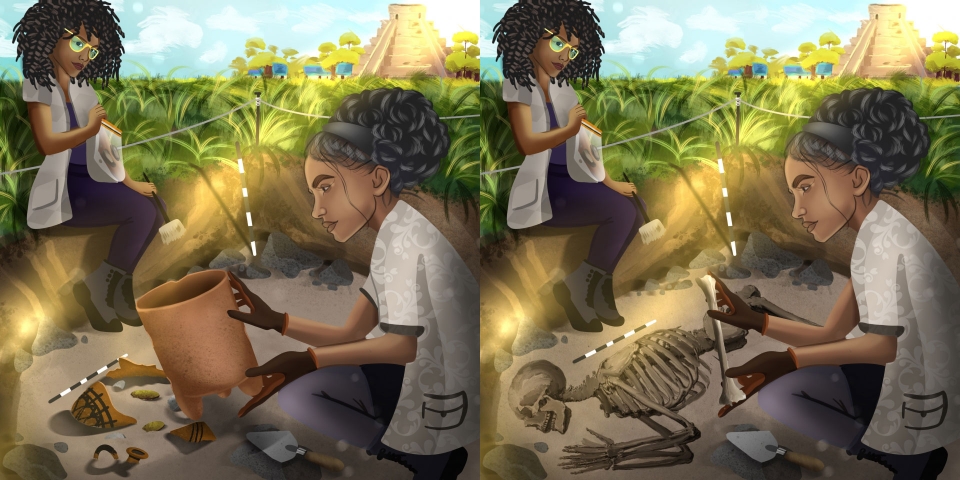 The team and the vision

The diverse group of graduate students want to show what anthropology looks like to them.

The team was mindful of how many identities one person can have. They also considered how one image could portray multiple aspects of a person’s life. Gleason notes how often binary labels can fail to accurately define a person. Gleason, for example, is a United States Air Force veteran, a graduate student and an adjunct anthropology professor at a local community college. 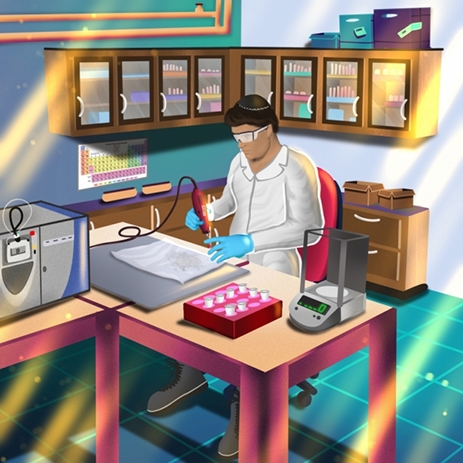 The illustrations also help people visualize areas of anthropology that might be more difficult for people who don’t work in anthropology to understand.

Sofía Pacheco-Forés graduated from ASU with a PhD in anthropology last spring, but continues to serve as one of the main collaborators of Anthro Illustrated. She is excited about utilizing accurate illustrations to help describe her field — bioarchaeology, an area of anthropology that studies ancient human remains.

A common ethical theme in anthropology is to be aware and respectful of human remains, and one way anthropologists can do this is by not sharing images of human remains. This can make it difficult for people to visualize what a bioarchaeologist does.

“I was very excited about the opportunity to have illustrations that I could use for outreach to show what bioarchaeology looks like,” Pacheco-Forés said. “People can actually see what I’m talking about when I describe archaeological chemistry on bones and teeth, but without actually showing images of human remains.”

Pacheco-Forés does a lot of education and outreach with elementary school children, and her “Skype with a Scientist” sessions are more engaging when she can use bright imagery.

Each image is intended to be both visually compelling and accurate, but there is often more than meets the eye. For example, one illustration (at right) depicts a queer person studying primatology. A cultural consideration of place was important while creating this image. Gleason notes many popular locations for observing wild monkeys are in countries where it’s not safe to be a queer person.

So, instead of the person wearing a shirt that says “PRIDE” across the front, the representation is more subtle.

“We’re trying to be accurate in lived experience while still trying to foster belonging,” Gleason said.

Response from the public

Tisa Loewen is a graduate student involved with Anthro Illustrated. When Loewen shared the first illustrations on her Twitter account, she was overwhelmed by the response.

“I wasn’t prepared to be the public relations person,” Loewen said. “I was just really excited to share our project.” 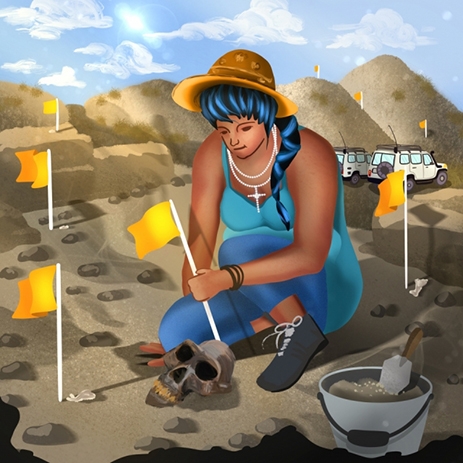 She said she has experienced personal growth through the process of creating and then unveiling the illustrations, managing people’s responses, editing illustrations and rereleasing them. At times it was challenging, but she said it’s worth doing all the hard work.

Gleason said the project grew faster than anyone expected, and the feedback is mostly positive.

“It’s monumental to me, to have people I really aspire to be like, who’ve been in the field for so long, say that they finally feel seen," Gleason said.

“I was really surprised at the amount of graduate students and professors, even tenured professors that I really look up to, who shared with me that ‘this is the first time I feel seen.' Or, people who are really famous in their field, who notice, ‘Wow, that guy looks like me.’ That blew me away.”

The team has received thank you notes and encouragement from around the world. Professors, graduate students and staff at cultural and educational organizations are using the images in the United States, Australia, Europe, South Africa and Mexico.

Now, knowing people are utilizing the illustrations globally, the team strived to be even more inclusive in the newly released images. For example, the illustration at right focuses on ethnobotany, which is the study of how people use plants. Gleason notes that they considered how to make the depiction technically accurate, but vague enough that it could be taking place in various rainforest locations.

Palmyra Jackson, education research coordinator for the American Anthropological Association, used the images as part of a campaign encouraging first generation college students and students of color to study anthropology.

“Thank you for creating illustrations that represent the people who make up the discipline," Jackson said. “Our whole office loved your illustrations and we're happy we can use them to support our ‘Anthropologists Go Back to School’ program.”

Aware of countries with very strict internet regulations, the Anthro Illustrated team made sure the website doesn’t track cookies or gather user data. This means the team doesn’t know how many people have visited the site since its launch in August of 2020.

Gleason’s two main goals for this project were to create illustrations that allow people to see themselves, and that the images would be free to use so there are no financial barriers.

Pacheco-Forés hopes that the illustrations will help kids see themselves in anthropology careers and inspire them to become anthropologists.

They’re off to a strong start with 68 total illustrations, but there are still a lot more to create. The team would also like to have illustrations with words translated into multiple languages.

Illustrations are created in batches each semester. This schedule allows room for ideas and adaptations, and gives Gleason time to fund the work.

Gleason said that they have received offers for donations, but politely decline and suggest instead donating to charities.

Founders of Anthro Illustrated include School of Human Evolution and Social Change graduate students Liam Gleason, Tisa N. Loewen and Sofía Pacheco-Forés (a recent graduate), who utilize the knowledge of many other graduate students to help review images for accuracy. The team also consults with volunteer community members and anthropologists.

The artist for Anthro Illustrated is Bircan Mutlu, a Turkish art student commissioned to create illustrations for this project from a pool of more than 50 applicants.